Chris Rainier: ancient cultures offer a different way of looking at the world 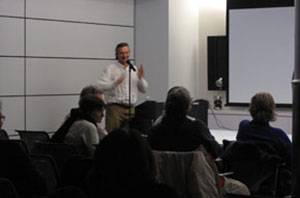 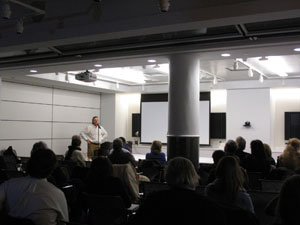 Ancient traditions are much more than just pretty costumes and traditional clothes and people dancing, it is a different way of looking at the world.

In the Western world we assume that, based upon science and a modern way of looking at the world, that there’s only one reality, but traditional cultures, and certainly the Maori culture teaches this too, that there’s different ways of looking at the world. As we tumble into the 21st century and deal with all sorts of serious issues around population, climate issues, we need to be looking at multiple ways of solving our problems and so not only should we be collecting sample of sea banks and DNA diversity, but we need to be thinking about cultural and intellectual diversity and traditional cultures from the Maori to the Quechua in Peru, to the jungles of the Amazon or Native Americans.

Photography and film for that matter, play a very important role in maintaining culture and revitalising culture. - Chris Rainier

The National Geographic Enduring Voices YouTube Channel uses technology to document and revitalize endangered cultures and their repositories of knowledge in areas of science, medicine, technology, and the natural world that are crucial to human kind.

Papua New Guinea. The Enduring Voices team interviews Koo Yandabage and Sam Ako, both Ipili speakers, at Tari. Thomas Nokondi (far left) observes. . Many of the world’s nearly seven thousand languages are oral and have never been recorded or scientifically documented, and within this century, forty to fifty percent of them will no longer exist. As they vanish, we lose entire universes of the conceptual thought, practical knowledge and technologies that they contain.

The National Geographic Enduring Voices Project uses technology to document and revitalize endangered cultures and their repositories of knowledge in areas of science, medicine, technology, and the natural world that are crucial to humankind.

The National Geographic Enduring Voices YouTube Channel allows many of these tongues to have a presence in the internet for the very first time.  Through the work of National Geographic Explorer and photographer, Chris Rainier, and linguists Dr. K. David Harrison and Dr. Gregory Anderson from the Living Tongues Institute, a small and endangered language that may have previously never been heard outside of a remote village can now reach a global audience.  Using YouTube as a platform, scientists, visual artists and communities can now collaborate more effectively on promoting language revitalization.

The YouTube channel features videos such as Rudolf Raward reading the first book written in Matukar-Panau, a language spoken by about 500 people in the Matukar village in Papau New Guinea and songs by Aydyng Byrtan-ool, a talented young Tuvan singer and epic storyteller in Southern Siberia, hip-hop performed by Songe Nimasow in the Aka language of India, and videos demonstrating how the Foe language of Papua New Guinea uses body parts to count from 1 to 37.

The launch of the channel comes on the heels of an announcement by Harrison and Anderson of a “hidden” language of India known locally as Koro, that is new to science and had never been documented outside of its rural community.  Koro is one of half of the world’s languages likely to vanish in the next 100 years. 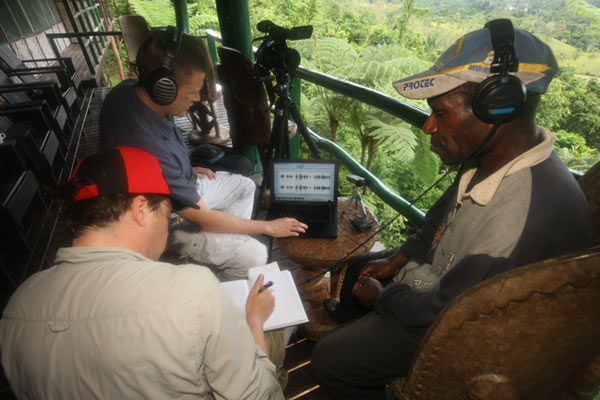 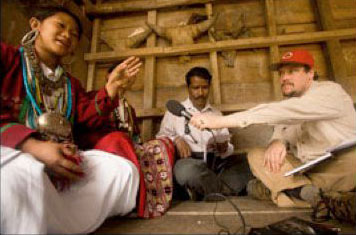 Left: Felix Andi, Yokoim communicty leader of Kundiman Village, consults with Greg Anderson (left) and David Harrison (center) to translate a Yokoim song.  Right: Dr. Ganesh Murmu and Greg Anderson interview woman from Aka tribal group, Kichang Village, Arunachal Pradesh, India. Photograph by Chris Rainier . In the midst of a language extinction crisis, we are also seeing a global grassroots movement for language revitalization. Speakers are leveraging new technologies, such as social networking and YouTube, to sustain small languages. As Harrison describes in his book The Last Speakers, we are all impoverished when a language dies, and all enriched by the human knowledge base found in the world’s smallest tongues.

Rainier has traveled to seven continents, making extensive expeditions throughout Africa, Antarctica, and New Guinea. His photography has been seen in Time, Life, Smithsonian, the New York Times, Outside and publications of the National Geographic Society. Rainier has photographed global culture and conflict, famine, and war in such places as Somalia, Sarajevo/Bosnia, Sudan, Ethiopia, Cambodia, and Iraq. He has won awards for his photography, including the prestigious Lowell Thomas Award given by the Explorers Club for adventure stories. Rainier’s photography has been shown and collected by museums around the world, including the Australian Museum in Sydney, the Bibliothèque Nationale in Paris, the International Center of Photography in New York, the George Eastman House International Museum in Rochester, New York, and the United Nations. His books include: Keepers Of The Spirit, Where Masks Still Dance: New Guinea, Ancient Marks. From 1980 to 1985, Rainier was photographic assistant to Ansel Adams – the noted landscape photographer. chrisrainier.org