Streaming Museum and artist Edwina Sandys celebrated the 25th Anniversary of the Fall of the Berlin Wall with a 12-screen exhibition in Berlin at Friedrichstrasse the main transportation hub, and the 20th Anniversary exhibition in NYC, Seoul, Milan, Bucharest, Melbourne, Montevideo

Edwina Sandys’ Breakthrough in Berlin for the 25th anniversary of the Fall of the Berlin Wall, 2014

Merkel did not cite any examples, although she would have had plenty of choices. Today, dozens of walls and border fences continue to separate nations or territories across the world. Most of them were erected after the fall of the Berlin Wall, and there seems to have been a particular increase over the past decade.

According to data researched by Élisabeth Vallet, a scholar at the University of Quebec in Montreal, and visualized by The Washington Post, the number of walls worldwide remained stagnant after the fall of the Berlin Wall briefly. However, wall construction projects proliferated dramatically after the terrorist attacks on Sept. 11, 2001 — reflecting instability in the Middle East and elsewhere. By 2011, more than 45 walls separated countries and territories.

The Washington Post: “These 14 walls continue to separate the world” by Rick Noack

. BREAKTHROUGH is a monumental historic sculpture by artist Edwina Sandys, granddaughter of Winston Churchill, created from 8 Berlin Wall panels in 1990 and installed at the Churchill Memorial Museum at Westminster College in Fulton, Missouri. Streaming Museum commemorated the 20th and 25th anniversaries of the Fall of the Berlin Wall with an original video documentary of the work along with historical imagery including a collection from the LIFE Magazine archive. The program toured partnering public spaces in Asia, Europe, South America and Australia, and was exhibited at Chelsea Art Museum in NYC.

For the 25th anniversary on November 9, 2014, as part of the city-wide celebration of Berlin, a new version of the Breakthrough documentary was presented in the Friedrichstrasse subway where 50,000 people pass each day.

For the 20th anniversary, Breakthrough opened with a military parade in Piazza Duomo, Milan, Italy, on November 7, 2009 as a centerpiece of the city’s celebration which was viewed live around the world via Piazza Duomo’s webcam. It toured the museum’s network of public spaces worldwide, November 5, 2009 to January 5, 2010. [Images and documentary below]

An exhibition at Chelsea Art Museum in New York City, November 5 to December 5, 2009, featured a dramatic 32 x 12 ft image of the sculpture Breakthrough, an audio recording of Winston Churchill delivering his Sinews of Peace (“Iron Curtain Speech”) at Westminster College in 1946, historic material on the making of the sculpture, and a film on the history of the Berlin Wall.

On March 5, 1946, at Westminster College, Fulton, Missouri, Former Prime Minster Sir Winston Churchill delivered his Sinews of War address, also known as “The Iron Curtain Speech”, where he warned of the coming tension with the Soviet Union. LISTEN HERE (44:00)

On November 9, 1990, the first anniversary of the tearing down of the Berlin Wall, speaking from the same podium from which Winston Churchill had delivered his ‘Iron Curtain” speech, President Ronald Reagan dedicated “Breakthrough” to a crowd of thousands of people including diplomats and dignitaries. “In dedicating this magnificent sculpture, may we dedicate ourselves to hastening the day when all God’s children live in a world without walls. That would be the greatest empire of all.”

In May 1992, the former Soviet leader Mikhail Gorbachev visited Westminster College. Speaking from the same podium where Winston Churchill first spoke of an “iron curtain,” Mikhail Gorbachev proclaimed that humanity has entered a new era of history and needs a democratic world government to guide it.  “Here we stand, before a sculpture in which the sculptor’s imagination and fantasy, with remarkable expressiveness, convey the drama of the “Cold War,” the irrepressible human striving to penetrate the barriers of alienation and confrontation.  It is symbolic that this artist is the granddaughter of Winston Churchill and that this sculpture should be in Fulton.” 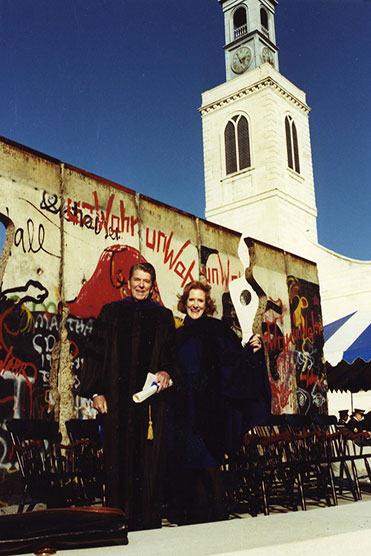 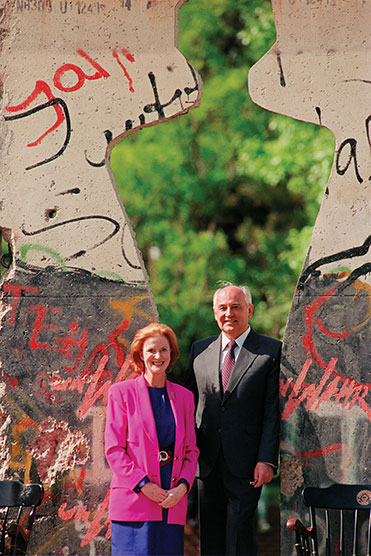 A 32 x 12 ft wall-mounted image of the sculpture Breakthrough (1990), the monumental historic work Edwina Sandys created from 8 Berlin Wall panels, was the centerpiece of the dramatic exhibition.

The installation included audio excerpts from Edwina Sandys’ grandfather Winston Churchill’s historic “Iron Curtain” speech, delivered in 1946 at the site where the Breakthrough sculpture was permanently installed in 1990, by the Churchill Memorial on the campus of Westminster College in Fulton, Missouri.

Also exhibited were a collection of prints documenting the history of the sculpture, and film documentaries One Bite of the Apple: The Artist Edwina Sandys and Writing on the Wall: Remembering the Berlin Wall, directed by John Michalczyk.

Pianist Taka Kigawa performed Beethoven’s Ode to Joy from Symphony No. 9 in D minor, Op. 125, arranged by Liszt, on November 11 at 7 PM, presented by Performing Arts at Chelsea Art Museum, commemorating the historic performance by the New York Philharmonic conducted by Leonard Bernstein in East Berlin on December 25, 1989, six weeks after the fall of the Berlin Wall. Also on the program - “L’Isle Joyeuse” by Debussy and “Trois Mouvements de Petrouchka” by Stravinsky.

The Yamaha Disklavier is the official piano of Performing Arts at CAM takakigawa.com

"The Pianist, Known for his Daring" - The New Yorker

Stronghold for 8 bass players by American composer Julia Wolfe, was performed on November 10 at 1PM at Chelsea Art Museum, NYC, by Robert Black and The Hartt Bass Band. The piece is from her CD Dark Full Ride.

DOX, Centre for Contemporary Art, Prague, Czechoslovakia In conjunction with the Breakthrough exhibition, “The Value of Freedom: Nothing is Black and White” a public program directed by educator Karina Kottová, taking place October 12, 2009 to February 2, 2010. doxprague.org

20th Anniversary of Berlin Wall Fall: Documentary by Boston College filmmakers The stories of leaders and ordinary citizens caught in the political power struggle that was the Berlin Wall are the subject of a new documentary to be screened at Boston College on Wednesday, Nov. 4. Shot on location in Berlin, Writing on the Wall: Remembering the Berlin Wall will be shown at 7 p.m. in Fulton Hall on BC’s Chestnut Hill campus, 140 Commonwealth Ave., Chestnut Hill. The screening is free and open to the public. Read more

Guests from around the country attended the November 5th opening reception for Breakthrough by Edwina Sandys at Chelsea Art Museum in New York City. 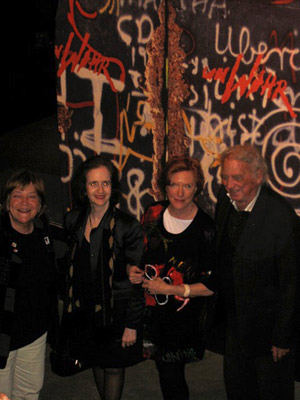 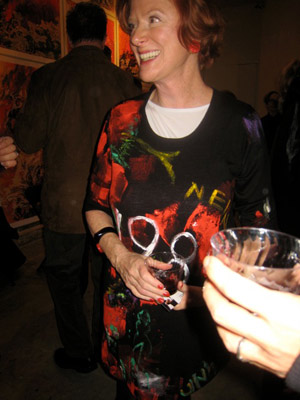 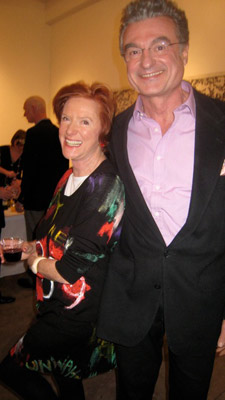 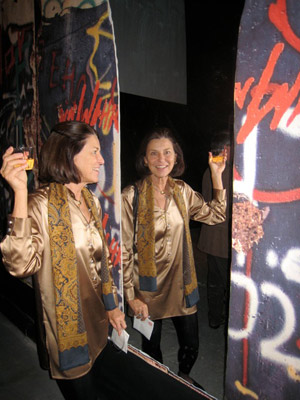 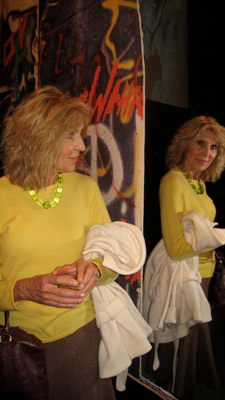 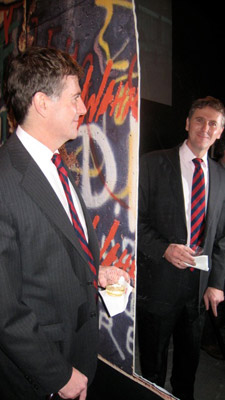 Breakthrough at Chelsea Art Museum is made possible in part with public funds from the New York State Council on the Arts, a state agency, and the New York City Department of Cultural Affairs, in partnership with the City Council. 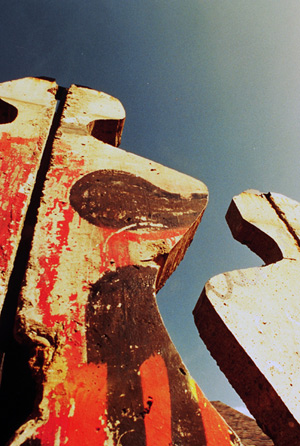 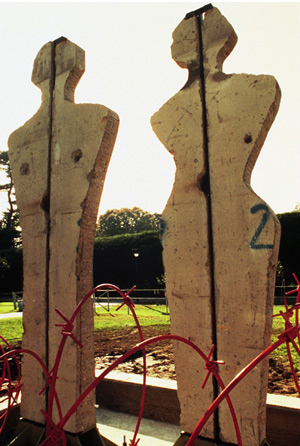 Using the cutout pieces of the Berin Wall that Edwina had carefully saved from her Breakthrough sculpture, she created a new sculpture BreakFree for the Franklin D. Roosevelt Library in Hyde Park, New York. The two 12 foot figures of Man and Woman are installed at FDR’s home in the Hudson Valley. The sculpture shows the figures of a man and a woman emerging from symbolic, giant barbed wire, expressing Man’s irresistible quest for freedom. Appropriately, this sculpture stands on a podium inscribed around the base with Roosevelt’s ‘Four Freedoms’.

Breakthrough was perfectly placed at Fulton in 1990. And in 1994, BreakFree, its counterpart, found its own perfect place at Hyde Park, New York.

In 2007, a new dimension was added to this hallowed ground by the construction of the Freedom Court. In honor of the friendship between the two legendary leaders, Edwina was instrumental in commissioning a bronze bust of Winston Churchill by sculptor Oscar Nemon, to be placed opposite one of FDR already in existence. The two sculptures flank the entrance to the court so that now and forever the two old wartime allies will be able to look at each other in a dynamic ‘outdoor room’ made of trees and shrubs.

Edwina’s BreakFree now stands center stage in the Freedom Court, bearing witness to the ideals these great statesmen stood for, and bringing all three sculptures together in a magical web of connectedness.

Ambassador William Vandenheuvel, President of the Franklin and Eleanor Roosevelt Institute: “I can think of no more fitting place for BreakFree than here at the Freedom Court, flanked by the busts of Franklin and Winston, the two giants who fought for freedom, and were the founders of the United Nations. Churchill’s ‘Jaw, Jaw, Jaw is better than War, War, War’, and Roosevelt’s ‘We have nothing to fear but fear itself’, show that their words are as relevant today as they were sixty years ago.”

Edwina Sandys, “I am happy to bring BreakFree here, and with this work of art, to draw together some strands of history.”

“From Stettin in the Baltic to Trieste in the Adriatic, an iron curtain has descended across the continent…” Winston Churchill

The Museum is located on the college campus in Fulton, Missouri, the site of Churchill’s famous “Iron Curtain” speech. The Museum was founded in 1969 to honor the life and legacy of one of the greatest leaders of the twentieth century. It is housed within the Church of St. Mary the Virgin, Aldermanbury, a 12th century church from the middle of London, redesigned by Sir Christopher Wren in 1677, that was relocated to Fulton. The undercroft of this beautiful and historic Wren church is a museum filled with a priceless treasury of artifacts and information relating to the life and times of Sir Winston Churchill. Churchill himself was intrigued by the imaginative idea of a restored Wren church in America’s heartland. He wrote, “It may symbolize in the eyes of the English-speaking peoples the ideals of Anglo-American association on which rest, now as before, so many of our hopes for peace and the future of mankind.”

The museum tells the story of a hero who led the free world’s fight for freedom, from his privileged youth as the son of a British aristocrat to the darkest days of war. This museum provides a chronicle of the life and times of one of the world’s most memorable political leaders and serves as a venue for special artistic and historical exhibits, as well as a variety of social and cultural events. The Churchill Museum is part of the fabric of everyday life on the campus of Westminster College. Students attend church services here, use the extensive resources of the Museum’s library for research, and serve as tour guides. Many marriages take place in the Christopher Wren church, a light-filled sanctuary where the poet John Milton was married and where Shakespeare may have worshipped. Most of all, the Museum symbolizes the philosophy upon which the college was founded in 1851. Westminster’s reputation for academic excellence begins with the belief that “a freed mind is the chief object of education,” an idea vigorously applauded by Sir Winston Churchill.

Other world leaders who have followed in Churchill’s footsteps and journeyed here to speak at the Museum include: Presidents Reagan, Ford, and Bush; British Prime Minister Margaret Thatcher; Polish President Lech Walesa; and Soviet President Mikhail Gorbachev who, fittingly, gave a speech announcing the end of the Cold War and marking the fall of what Churchill had named, “The Iron Curtain.”

German World Online: 20th Anniversary of the Fall of the Berlin Wall – How Germany Celebrated its unification in the nation’s capital and in many US cities

Secretary of State Newsletter: Westminster College and the Cold War