A View From The Cloud opens at Dag Hammarskjold Plaza with UN leadership, astronaut

A View From The Cloud is a multi-year arts and innovation program.

Ron Garan aboard the International Space Station. Image courtesy of NASA. An Introduction to A View From The Cloud at Dag Hammarskjold Plaza – “the Gateway to the United Nations“

Hundreds of people gathered at Dag Hammarskjold Plaza on September 14, 2015 for a cinematic experience of space and the world, with Special Guest speaker, United Nations Assistant Secretary General on Climate Change, Janos Pasztor, a screening of the film PLANETARY, remarks by Special Guests, Astronaut Ron Garan, Director, Guy Reid, Cinematographer, Christoph Ferstad, and a presentation of art by international artists.

The event introduced A View From The Cloud – a multi-year globally touring arts and innovation program that engages people with the United Nations Sustainable Development Goals.

Artists Maxi Cohen, Michael Najjar, Aparna Rao, Edwina Sandys, John F. Simon, Jr., Marty St. James, Ragin Wenk-Wolff, and Marina Zurkow, whose work will be among those featured in A View From The Cloud were in attendance.

A View From The Cloud is co-produced by Streaming Museum and World Council of Peoples for the United Nations.

The documentary film PLANETARY by Planetary Collective sheds new light on how our worldview is profoundly affecting life on our planet.

A View From The Cloud is inspired by the overview effect – a cognitive shift in awareness reported by some astronauts and cosmonauts during spaceflight, often while viewing the earth from orbit or from the lunar surface.

It refers to the experience of seeing firsthand the reality of the Earth in space, which is immediately understood to be a tiny, fragile ball of life, “hanging in the void”, shielded and nourished by a paper-thin atmosphere. From space, astronauts claim, national boundaries vanish, the conflicts that divide people become less important, and the need to create a planetary society with the united will to protect this “pale blue dot” becomes both obvious and imperative.

Third-hand observers of these individuals may also report a noticeable difference in attitude. Astronauts Rusty Schweikart, Edgar Mitchell, Tom Jones, Chris Hadfield and Mike Massimino are all reported to have experienced the effect.

The term and concept were coined in 1987 by Frank White, who explored the theme in his book The Overview Effect — Space Exploration and Human Evolution (Houghton-Mifflin, 1987), (AIAA, 1998). Reference here.  .

“Planetary” film by Planetary Collective, and the sound track by Human Suits “The Orbital Perspective: Lessons in Seeing the Big Picture from a Journey of 71 Million Miles” by Ron Garan “The Overview Effect — Space Exploration and Human Evolution” by Frank White 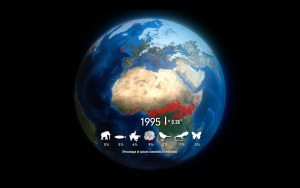 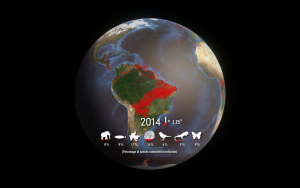 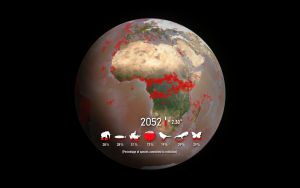 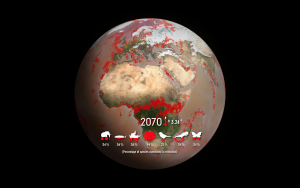 “Counting One to Four: Nature morte” by Debbie Symons, featured at the introductory event of A View From The Cloud, traveled to Federation Square, Melbourne, and to Paris for COP21.

The event was made possible with generous support from

Launched in 2008, Streaming Museum has presented art exhibitions and public programs that have reached millions of people on 7 continents from North Pole to South Pole, world cities to remote locations, in public spaces, at cultural centers and StreamingMuseum.org. .

(WCPUN) is a 501(c)(3) not-for-profit organization dedicated to facilitating partnerships and platforms internationally that promote awareness and implementation of the UN’s goals. WCPUN is a NGO associated to the United Nations Department of Public Information. wcpun.org

A View from the Cloud provides a valuable platform for partnerships and sponsors. For information contact: