Art Plural Gallery and Streaming Museum are pleased to present a new public artwork by Spanish artist Tom Carr. Titled Arrival · Departure, the digital video shows silhouettes of urbanites ascending and descending an escalator within the frame of a pinhole. Arrival · Departure will be displayed on the Streaming Museum’s many large-format public screens located all over the world.

Tom Carr is internationally recognized for his formally-rigorous sculptural works, and since then he has gone on to create numerous large-scale projects, especially for outdoor public spaces. From monumental steel sculptures in Madrid to light sculptures in the French mountains, the prolific and versatile artist has materialized his creative vision in various locations all over the globe. Recently in 2010, working together with Swiss art dealer Frederic de Senarclens, Carr brought a site-specific light projection to Singapore’s shopping district. Titled A Red Carpet for Orchard Road, the work transformed the sidewalk into a carpet of animated digital patterns, and was highly interactive. This year, Art Plural Gallery and Streaming Museum are collaborating to bring Tom Carr’s transformative and reflexive art to a wider audience.

Arrival · Departure is a simple vignette of an instantly recognisable scene – of people riding escalators – that evokes contemplation about urban existence. Interestingly, while there is no escalator in the scene per se, the ubiquitous yet unique manner by which the people are moving is telling enough. Tom Carr is known to reference staircases in his earlier sculptures. He never included figures, but insinuated human presence through the characteristics of the stairs. However, Arrival · Departure does quite the opposite. People are explicitly present but their environment is ambiguous. However, reduced to mere silhouettes, these anonymous people are dematerialized, losing and regaining their shape as those ascending and descending the escalators cross paths in the two-dimensional space, where there is no distinction between foreground and background. They travel along the same path within the same space, and yet there is no communication. Depicting both the individual and the archetype, the silhouettes portrays the universal condition of people in transit.

Tom Carr describes a hive of activity, where people constantly land and take off from hubs. Referencing airports and the capacity for human beings to be transported quasi-instantaneously from one place to another, the artist tells us about the loss of markers, about how people are flying over their life as if in planes.

The invisible escalator Carr alludes to could be compared to what the philosopher Walter Benjamin called “lieux de passage” in Paris, capitale du XIXe siècle, naming the passages that link different places – buildings, shops, streets, avenues… – that people cross unconsciously, without realizing they are inhabiting a transitional place. “We use our energy when we are walking before and after using an escalator, but when on it, we are carried for some seconds. We cease in making an effort, yet we don’t stop moving. We go from one level to another, maybe indoors to outdoors or vice versa,” says Tom Carr. The hypnotic visual of people standing still while being transported in and out of the frame creates an intriguing paradox of stasis and movement. Carr calls into question the relationship between our consciousness and the spaces our bodies inhabit, in the context of the urban pace of life that human society and progress has set in motion.

Upon seeing Arrival · Departure, we are reminded consciously or subconsciously of this “suspension of our individual time” and may be struck by the non-stop passing of silhouettes standing still as they are moving slowly and continuously across time.

Cocor MediaChannel has been a core partner of Streaming Museum since 2009. It is an outstanding example of media architecture and the largest media facade in Europe combining both commercial and cultural programming. Cocor’s staff has established the company as an international leader in the use of technology for community building with diverse local and international content. 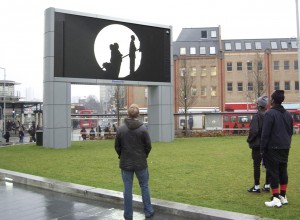 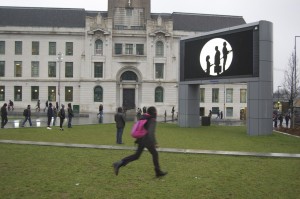 Tom Carr was born in Tarragona, Spain in 1956. He holds a Masters of Arts in Fine Arts from the University of Barcelona. He earned a PhD in Fine Arts and has been a professor at the Escola Superior de Diseño y Arte, Barcelona since 1981. Carr has also been a visiting professor at the School of Visual Arts in New York. His installations, sculptures and digital art are found all over the world.